He works round the clock, constantly on his upcoming shows and coordinating with his team. I was lucky to catch him on a day where I could find him at his house. His politeness came across when he offered me tea he was making. I saw a glimpse of his trophy cabinet with hardly a place to keep new ones as it was full. After chasing him for days anchor Girish Sharma finally gave me time for 30 minutes. A glance at his 2018 calendar made me aware that has been doing almost 365 days of shows Worldwide. Performed in more than 20 countries globally.

The wall was decorated with his pictures with the whos of Bollywood. Talking about the pics he said “Working with zoOm Tv, gave me a platform to channel the inner anchor in me when few celebs told me I should fly on my own”. “It was my then-boss Monisha who supported me. For a boy who was labeled vernacular and instilled with a fear that if you lose the job you won’t survive in Mumbai. It was a tough choice. But I have never settled for easier routes in life” Girish said.

My mobile showed me that Girish has a huge fanbase on YouTube for his Anchoring videos & he has shared a stage with almost all the top-notch celebrities. In the live events industry, today Girish is a most demanding anchor for Big Fat Indian weddings & Corporate shows.

Ask him about this and he says “At a point, I had no hope in life. For some time I had hit rock bottom, depressed and often hopeless. Some said it’s best to do a 9-5 Job, others suggested that I should go back to my village and city life is not for me. These were people who judged me, who already declared me a failure even before I started my fight. I decided I will not yield. I decided not to prove others wrong but to prove that fraction of me wrong who would have succumbed to this trepidation”.

Girish hails from a small village ‘Biron Dewal’ in the Rudraprayag district of Uttarakhand state in northern India. As there was no source of earning in the village Girish family shifted to Haryana when he was just 7 years old.

“We shifted to Ambala Cantt Haryana as there was no work for my father in the village & we start serving as the priest of the Temple. There I found that I loved talking to new people. I was a kid only but people used to come to Temple talk to me more than praying to God.”

As a child, only Girish found that he is a motormouth because of which even his maternal uncle Mr.  Bishambar Khali kept his ‘Gichi’ ( which means too much speaking in Garhwali language). He also recalls the most tragic event of his life that turned the world upside down for a 17-year-old boy.

“I remember it was 12th December 2001, Wednesday. I was in 11th class & getting ready for my school. Suddenly I saw my father trumbling with heart pain & within a few minutes, he died. My mother was illiterate no one at home was there to earn money. It was a dark future in front of me. We decided to go back to the but my Brother Chetan Sharma left his studies in between & started working in Temple to give my school fees.”

“I was in huge need of money while doing a job in Mumbai at evening I used to work as a catering boy to serve food at the event and earned 200 rupees per day. Sometimes my known people were as a guest at functions so I used to hide in the .”

As our talks continued, I was led to a room that was filled with designer outfits. Girish Sharma is also known for his unique fashionable dresses. I quizzed him more about his journey and his first opportunity to perform on stage.

“Today you are seeing of outfits but it was always not like this. When I got my first opportunity to perform on stage I had no outfit to wear so I borrowed clothes from a friend to wear at the event. People loved my Performance and took my number. I started getting many calls.”

Since then there was no looking back. By mouth publicity, Girish Sharma started getting calls all over India & from abroad too. He became the first choice of live events Anchoring. With over 3000 national and international live shows to his credit now, Anchor Girish Sharma, in a span of 8 years, has mastered the art of performing at the spur of the moment.

“Whenever I go on stage I talk to myself and say today is my last event of life. What if there is no tomorrow? What if tomorrow there is no me? so, how should I perform? Shouldn’t this be the best performance of my life? shouldn’t the applause roar loudest today? The answer comes from within- Yes. Definitely”

I wanted to quiz him more about his life but my time with this talented youngster was over and I see his team is at his doors to plan for an abroad show scheduled for later this month. Anchor Girish Sharma is the finest example to say that if you think you can achieve it then you will achieve it. 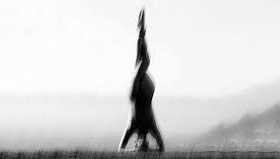 Nudity in art ; acceptance of expression

Coronavirus disease: People are finding in new ways to stop the spread of the coronavirus. Whether it is quarantine, self-isolation or pipeline delivery in India.